The Seven Steps to Closure 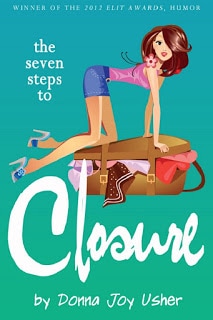 Contemporary Romance
Tara Babcock awakes the morning after her 30th birthday with a hangover that could kill an elephant – and the knowledge she is still no closer to achieving closure on her marriage breakup. Things go from bad to worse when she discovers that, not only is her ex-husband engaged to her cousin – Tash, the woman he left her for – but that Jake is also running for Lord Mayor of Sydney. Desperate to leave the destructive relationship behind and with nothing to lose, she decides- with encouragement from her three best friends – to follow the dubious advice from a magazine article, Closure in Seven Easy Steps. The Seven Steps to Closure follows Tara on her sometimes disastrous- always hilarious – path to achieve the seemingly impossible.

Welcome back, this week I read The Seven Steps To Closure by Donna Joy Usher. I started this book while on the plane back home after finishing up Bleddyn Hall and I wasn’t sure what I was going to make of this book because I’ve never read anything that started off with a heartbroken woman. But this was a surprisingly great book and had me hooked in so bad I stayed up until midnight two nights in a row even though I needed to get up for work at 6am. It was worth it though! It was worth crashing and being ridiculously tired the day after I finished the book at midnight, just so I could finish the book.

We started off with Tara who is heartbroken a yr after she left her husband after finding out he was cheating on her. With her cousin. At this stage she’s just had her 30th birthday and finds out her husband is already engaged to before she’s even received any divorce papers. What kind of a guy cheats on their wife, let alone with her cousin who she had previously been really close to?!

To try and help her get over Jake and allow her to regain control of her life, her 3 girlfriends encourage her to complete the 7 steps to closure from an article in Cosmo. Tara is a little hesitant to do this not thinking it would help. However she realizes that she needs all the help she can get at this stage an agrees to complete all 7 steps to closure. I’m sure most of us have been there at some point in our lives. And it sucks. The fact that she’s got 3 awesome girlfriends there to support her and help her get over her ex is amazing, and more than some people have when in similar situations.

The first 2 steps are really quite simple and I was surprised Tara hadn’t already done this as many woman will get a new haircut and wardrobe after a breakup to allow themselves to feel better and more empowered. But I gota say, I was surprised by step 4! Have meaningless sex. This isn’t everyone’s cup of tea and can go against some peoples beliefs and values so it can be really tricky. Plus if you don’t do this with the right type of guy it can even be detrimental to the healing process. So I’m kind of surprised that Cosmo would recommend women have meaningless sex!

Luckily Tara doesn’t sleep with just anyone and passes on a few guys that sounded really creepy. She is however committed to having meaningless sex and so goes out to have drunk meaningless sex. By the sound of what she remembers she found the right type of guy to do this with. And she seems to have held up well the morning after which was a relief to hear.

At this stage her friends give her her passport back so she can organise step 5, which is to take an adventurous holiday! Here I was thinking she’d be jetting off in like 3-6 months because that’s normally how long I’d spend organising a holiday since you need to get time off work, flights, hotels etc. I guess having one of her best friends as her boss meant she had more flexibility than most and could organise a holiday to head off in a few short weeks. Now me personally could never do this. My OCD and need to control details would leave me a stressed out wreck trying to organise a holiday on such short notice. But Tara manages it and jet’s off to India to stay with her ex-brother-in-law who also happens to hate Tara’s ex Jake.

Fate seems to have kicked in and on the way to India the guy sitting next to her keeps bumping into her, looking at her and overall making her feel uncomfortable. Until he tells her that he was her one night stand. At which point she becomes mortified, which had me feeling mortified along with her. Having to face your one night stand and having to admit that you couldn’t remember them aren’t exactly easy things to do. Luckily he seems pretty cool about it and even proposes that they do some sight seeing together. I started to get a little skeptical about Tara’s safety at this stage. Because to me this seems like a silly thing to do. Although that might just be because of all the crime based tv show’s I’ve watched where the careless girl inevitably gets kidnapped and/ or killed by the hot friendly guy she barely knows.

Good news is, while out with her ex-brother-in-law it turns out Matt is also friends with him. So he can’t be that bad! And after a turn of events Matt ends up having Tara tag along with him to see some of India’s sights. Along this trip there are some cringe-worthy moments where I really feel for Tara and I feel like she had to have ruined any chance of ticking off step number 6, have meaningful sex, with Matt. I mean, she got food poisoning and spent a night on the toilet which is bad enough as it is. To then have Matt offer to slide her book to her since she’s likely to be there and offer to put the TV on really loudly so she doesn’t feel as self-conscious has got to kill any feelings in that department, surely right?

And if that didn’t, you’d think tripping and landing on a pile of cow shit would definitely do it! Nope. Tara is one lucky girl where none of these things turn Matt off of her. And I sat there thinking, I couldn’t even get a kiss out of my partner when I went through this for almost a day and she gets sex and a relationship within a day of having food poisoning? Life is definitely not fair, and I found myself a little jealous that Tara could just jet off to India, meet a cute guy (ok technically it’s re-meet) on the plane and get to have her very own tour guide take her around to all the best places on just a few weeks or days notice!

And then when they got back to Sydney it all falls apart. And I gota say, I was secretly happy that this happened. Then started to feel bad when I found out that she had to publicly watch and hear how both her ex’s were moving on with their lives by getting married to other women.

With some encouragement from her friends, Tara ends up trying to crash Matt’s wedding to object to the marriage. Except she rocks up just a little bit late to then be hit in the leg with a golf ball from her ex husband Jake, to then swallow a bee who stung her tongue when she falls to the ground. Which meant that she needed an ambulance since her tongue and face became quite swollen. This really shows that she seems to get hit with the unlucky stick quite a lot. Which really allowed me to feel like I was her. Because I felt so similar to her.

And if she can get her happily ever after, maybe I can as well. Even if I am hard to get along with at times, seem to get hit with the unlucky stick quite a bit and that I don’t always find it easy to express how I feel and would rather withdraw and get away from what’s hurting me. So maybe I can learn to let go of my control like Tara did to really make the most of my life.

The next review will be for “His Fair Lady” by Kathleen Kirkwood. I look forward to seeing your then!

Feel free to comment below with your thoughts or feedback on this blog!

This review contains affiliate links you can use to purchase the book. If you buy the book using that link I, or the author, will receive a small commission from the sale. This comes at no additional cost to you.
.com
.co.uk
.com.au
Book Depository
PrevPreviousBleddyn Hall – Amanda L.V. Shalaby
NextBookworms Unite at ClunesBookTownNext 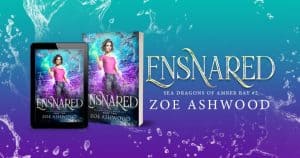 Don’t let the score compared to the first book fool you. This book builds on the first in the perfect way!