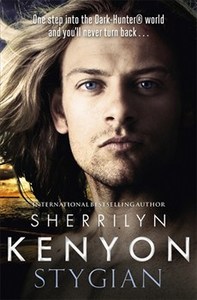 Dark Hunter
27
Paranormal Romance
-MAJOR SPOILER WARNING- While the books don’t have to be read in order, if you haven’t read Dragonsworn, this synopsis will contain massive spoilers for DS. We just wanted to warn you! -MAJOR SPOILER WARNING- Born before man recorded time, I lived for thousands of years, believing myself to be something I’m not. Someone I’m not. Lied to and betrayed by gods, Daimons, and Dark-Hunters, I’ve struggled to find my way in a world where I’ve been cursed since the moment a vengeful goddess prematurely ripped me from my mother and planted me into the womb of an innocent woman who thought me her son. Trained as a slayer and predator, I’ve learned to fit in and stay low. To become a tool for evil. Until I was sent to kill the one woman I couldn’t. My hesitation cost her, her life. Or so I thought. In an act of betrayal that makes all the others pale in comparison, I’ve learned that things are not what they seem in this world and that my Phoebe still lives. Now I will have to travel into the very pits of Hades to try and save her, even as everyone around me attempts to steal what little soul I have left. There’s only one person at my back and I’m not sure I can trust her either, for she was born of an enemy race. Yet sometimes the road to redemption is one that singes us to our very core. And if I fail to find the answers I need to save Phoebe, more than just my wife will die. We will lose the world. Both human and Daimon. ~Urian of the House of Aricles

Urian, our main character, is the son of Styxx and Bethany but grew up believing he was the son of Stryker. Kicking off before he was even born (when Acheron was killed and his mum Apollymi  went nuts on the world) through to 2017. Given we’d discovered in an earlier book that he’d married Phoebe, I wasn’t too sure how this was going to play out.

Cue a first love we didn’t know about, Xyn, and we’ve got the makings of a love triangle that goes across millennia. Makes it pretty interesting to see what happens!

The first portion of the book follows Urian for the first couple thousand years of his life, most of which was spent in Kalosis. On his few forays into the human world we see him cross paths with a few different Dark Hunters, Were Hunters and even Acheron and Savitar.

We even get to see a fair bit about Urian’s relationships with his brothers and sister’s. During these interactions and his various interactions with Xyn and Phoebe over the years we learn more about Urian than we have in all the previous books he’s featured in.

The first part of this book was a bit repetitive since it was taken pretty much directly from Acheron’s book from just after his death. And there were a few other sections that felt like this as well. Which can’t really be helped given how long Urian has been alive, and how much he’s been involved in other books.

What I didn’t like about how Sherrilyn did it is that she didn’t even try to re-write the scenes that Urian was in from his perspective. It felt more like a copy and paste from previous books.

Sherrilyn adds complexity to the story by having conflicting emotional responses from Apollymi towards Urian. We know she hates his true father, so why would she be close to him? Why train him to be amazing? Why be ok with him having Styxx’s emblem on his shield? Her love of him just felt so strange to me but at the same time so nice.

The biggest thing that was strange to me was Urian’s first love. And that it was to a dragon. From everything we knew about Urian until this point in time he has never ONCE mentioned loving anyone other than Phoebe. So to hear that he loved Xyn, and had a relationship with her over a span of hundreds of years. He loved her so much that he was devastated when she didn’t meet him and went back to her cave to check on her and found it abandoned and her long gone.

So my problem then became a matter of. Was Phoebe or Xyn his true love? Or is there someone new who has entered his life? Well after a whole lot of drama, adventure and tension it turns out Xyn was alive and locked as a statue all this time. Cue a bit more drama coz turns out Phoebe is alive as well and he ends up going back to Xyn and leaving Phoebe to try and enjoy what remains of her life.

Just like with Styxx’s book I was grabbed in, sucked in emotionally and really felt like I was there with Urian. The loneliness he’s experienced his whole life, as if he’s not like everyone else? It’s a feeling I’ve felt most of my life and its something that can isolate someone further than they already feel.

This review contains affiliate links you can use to purchase the book. If you buy the book using that link I, or the author, will receive a small commission from the sale. This comes at no additional cost to you.
.com
.co.uk
.com.au
Book Depository
PrevPreviousSent as the Vikings Bride – Michelle Styles
NextThe Autobiography of Satan – William A GlasserNext