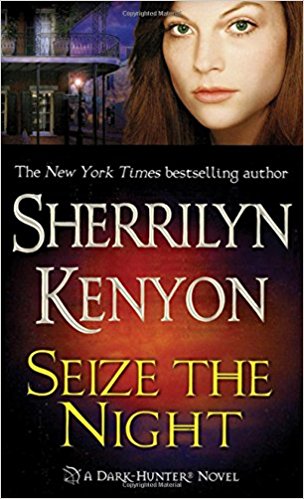 Dark Hunter
6
Fantasy Romance
Dark-Hunter: an immortal warrior who has traded his soul to Artemis for one moment of vengeance on his enemies. In return, they swear to spend eternity protecting mankind from the daimons and vampires that prey on them. Valerius isn’t a popular Dark-Hunter – he’s a Roman, which means that the largely Greek Hunters have a major grudge against him and his civilization for superceding them. To make things worse, he’s very conscious of his aristocratic background and breeding. So it serves him right when he runs into Tabitha Devereaux. She’s sassy, sexy, and completely unwilling to take him seriously. (Not to mention Tabitha is also the sister-in-law of Kyrian, a former Dark-Hunter and Val’s mortal enemy.) What Tabitha does take seriously is hunting and killing vampires-and soon she and Val have to grapple with the deadliest of all Daimons – one who’s managed to come back from the dead, and one who holds a serious grudge against both of them. To win against evil, Val will have to loosen up, learn to trust, and put everything on the line to protect a man he hates and a woman who drives him nuts.

As soon as I realised who this book would be following I was really confused. Why should I care about the love life of someone we hate? But of course I by the time I was reading this book I had started to get the feeling that Sherrilyn like’s to challenge our pre-conceived ideas and really push us not to “judge a book by it’s cover”. And going into this book I was definitely judging!

So if you’ve read the earlier books you will understand where I’m coming from. This book is following Tabitha, who other than being really quirky and a very dominate personality is fine, and Valerius Magnus. And there’s a reason that for once I included a last name. So in earlier books we find out that Valerius is a right pompus ass hole. Not only is his family directly responsible for many other Dark Hunter’s deaths. He himself is responsible for a few deaths including that of thousands of Greeks. And since most of the Dark Hunters are Greek they don’t like him, and he does nothing to try and make friends with them. Likewise, he requires a Squire (a servant) that speaks English, Italian AND Latin!

And that’s all before we find out anything personal about like, like the fact that he hates his Squire to be dressed in anything other than a suit, none of his Squires last too long (and all because the Squires council won’t grant Valerius the one request he has) and he expects dinner to be served at 7pm sharp (I might have the exact time a little off but you get the meaning) in the formal dining room. When he is around other Dark Hunters or Squires he seems to make it a point to rub them up the wrong way and reinforce the image of the big bad pompus Roman General.

However all these reasons to hate Valerius are the exact reasons why Tabitha is so good for him. She ignores his protests and forces her way into his life. Granted his protests aren’t actually that bad and when we switch to reading from his point of view it’s more out of fear for her safety than anything else. While with Tabitha he tries oysters (which Tabitha practically lives off of), tries beer, tries penis mac n cheese (did I mention Tabitha runs a sex shop? Like sexy lingerie, sex toys etc sex shop) and escorts a trans-gender (I believe they are pre-op) woman to a Drag event so that she has a chance of winning. None of these things suggest that Valerius is self absorbed, vain, mean or anything negative at all!

Like with all Dark Hunters we learn that Valerius’s past isn’t as easy as everyone thinks it was and that the betrayal he suffered wasn’t his slave not shinning his shoes appropriately. I don’t remember exactly what it was that caused his death but I do remember that he witnessed Kyrian coming back from the dead to kill his Grandfather. So unlike many Dark Hunters he witnessed the tragedy of their revenge at an early age and had a limited understanding of what he was getting into when he did decide to take Artemis’s bargain.

I felt that by the end of this book when Valerius did everything he could to protect Tabitha while respecting who she is as a person I had learned to respect him more than many other characters in the series. He never changed who he was as a person in terms of his values, ethics and morals even though others would have thought he’d need to just to keep Tabitha. What liked but at the same time had reservations about was Tabitha being willing to shut out her family for Valerius. Tabitha being Amanda’s twin is really close to her and was willing to give up that relationship for Valerius since Kyrian was already a part of her wider family.

Cool thing was (and I wish my sister bothered to care enough about me to do anything remotely like this) Amanda took the time to visit Tabitha in Valerius’s home to find out why Tabitha loved him. Based on that interaction Amanda decided to lay it out with Kyrian that he had to accept Valerius even though he didn’t like him just for Tabitha’s sake.

Whenever I want a feel good story about acceptance, individuality, opposites attract etc I love to read this one. I’m sure we all have those time’s where you wonder who could possibly love you and want to be with you for the rest of your lives. Reading this always reminds me that there’s someone for everyone. It may not always be a nice easy relationship. It might be full of arguments, spice and then making up. But I think so long as you both understand each others limits, how and why you react the ways you do you can get through anything together. Granted it’s not always a perfect science, but I believe so long as you can have a conversation around these differences then you can move forward and it will then work itself out.

I’m not sure my boyfriend would agree with me on that one but I can try!

This review contains affiliate links you can use to purchase the book. If you buy the book using that link I, or the author, will receive a small commission from the sale. This comes at no additional cost to you.
.com
.co.uk
.com.au
Book Depository
PrevPreviousThe Family Divided – Anne Allen
NextBehind the Door – A. GavazzoniNext

An Aussie love story featuring more than one couple set in the beautiful Whitsundays.