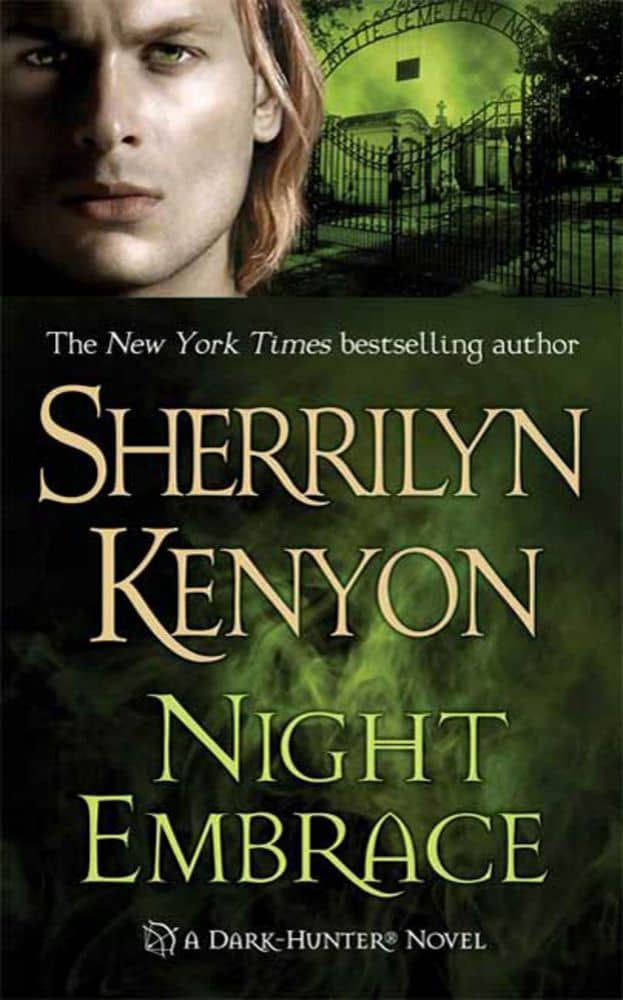 Dark Hunter
2
Fantasy Romance
“Night Embrace” spins the story of Talon, an ancient Celtic warrior who killed the son of the god Camulus. Camulus cursed Talon, decreeing death for everyone he loved. Now a Dark-Hunter in modern-day New Orleans, Talon meets Sunshine, who is key to ending his curse once and for all. Not to mention helping him to save New Orleans from an ancient god bent on total destruction…

Hi All, I’m not sure what happened but my draft of this post disappeared so it didn’t go up yesterday as planned. So I apologise about that! I hope you enjoy reading this even though it was delayed.

Ok so let’s jump into this one. My first thought when I started reading this book and discovered it was following Talon was “Hey that’s a good way to do a series without following the same character the whole time. Swap to another character we’ve met previously! Cool!” Unlike Julian and Kyrian, Talon isn’t Greek. Which had me wondering how he made it into the series. Up until this point in time I thought Artemis could only enlist those of Greek decent since that was her pantheon. So this tripped me up a little since Talon was a Celtic tribe leader.

Our other main character, Talon’s love interest is Sunshine. An artsy, eclectic and forgetful, very VERY independent and health conscious modern woman. Which had me wondering how on earth Talon could work with Sunshine, and how they could possibly meet. Well it turns out they meet because Sunshine is lost and witnesses Talon being run over by a float leading up to the Mardi Gras parade. Sunshine being the kind person that she is picks him up and takes him home to try and help him. Why she didn’t just call an ambulance and keep in mind her own safety by letting the professionals take care of him still amazes me.

Good thing is Sunshine’s family looks out for her and checks in on her and stays with her until they can determine that Talon won’t hurt her. Sunshine’s mother was the one with her when Talon woke up and had to try and explain why being in the sunlight was deadly to him, and his excuse is pretty silly sounding but I guess in a pinch it works. In typical Sunshine fashion she destroyed most of Talons belongings that survived the float leaving Talon with no clothes. So he used her phone (that needed to be fished out of a kitchen drawer) to call Kyrian to go to his house and grab him a change of clothes, a new phone etc so that he can get back to his life. While he waits he “enjoys” spending the  day with Sunshine which results in Talon being dressed in only a fluffy pink towel that barely covers his ass when Kyrian and Julian arrive.

Boys being boys. they relentlessly tease Talon about this sad fact is quite amusing given Julian was in a similar situation in a green towel in Fantasy Lover, and Kyrian had to be wheeled through a hospital handcuffed to Amanda in Night Pleasures!

Anyway fast forward a bit and Talon is being tricked by “Acheron” the Dark Hunter leader compared to the orders others are receiving. Part of this is to keep Sunshine and Talon together to allow them to fall in love. Throughout this period I was so confused as to what was happening, why another Dark Hunter Zarek was so violent towards everyone and yet was so kind and gentle. During this time we find out there are two “Acheron’s” out there, one is the true Dark Hunter leader while the other is there purely to make the Dark Hunters hate Acheron because he hates his twin brother.

That’s right. You read me right. Acheron has a twin brother who hates him! How could this possibly be true?! From everything that we know about Acheron all I could think was “noooo….. how could Acheron’s brother hate him?” once I’d come to grips with the fact that he even HAD a brother!

So let’s fast forward through Talon and Sunshine’s oddly melding, love fest and the revelation that Sunshine’s soul is the same soul as Talon’s human wife’s soul. Which explains why they are drawn to each other. Anyway, during the final showdown we finally find out that the necklace Sunshine’s mother gave her is a protective medallion of the Morrigan. This is important because Talon made a mortal enemy of the Morrigan’s famous enemy while he was still human. This same god is so vengeful that he came back purposely to torture Talon again by killing his reborn wife’s soul. The little glitch in that plan was the fact that Sunshine was under the Morrigan’s protection.

And to further that glitch the Morrigan actually comes to protect Talon and Sunshine since Sunshine is actually the Morrigan’s grand-daughter and is therefore immortal. They end up getting their happily every after while we discover an odd fact that suggests that Acheron is more than just a Dark Hunter when he can overpower and scare 3 gods and an immortal into submission. We also discover that he has a demon thing that Artemis is scared of that he controls. But I will leave more explanation of that for another post since I had to wait as well!

The main thing is I got to appreciate how such a strong independant woman like Sunshine could find happiness in a marriage with an old fashioned kinda guy. Which made me feel better at the time I was reading this because I have quite a dominant personality and I am extremely independent and I hate having to rely on others for anything. So knowing that she was able to find love and happiness definitely made me feel that I’d be able to do the same. Because at the time I first read this book I was not in a great place when it came to relationships. That has changed since then so now to me this book is a lovely reminder that opposites can work together, so long as both are willing to give a little to demonstrate their love of each other.

This review contains affiliate links you can use to purchase the book. If you buy the book using that link I, or the author, will receive a small commission from the sale. This comes at no additional cost to you.
.com
.co.uk
.com.au
Book Depository
PrevPreviousThe Sheik’s Son – Nicola Italia
NextConduct Unbecoming of a Gentleman – Wareeze WoodsonNext

I’ve never read a book set in Norway so this was a bit of a surprise to me, but a surprise in some very good ways.