The Code of Monte Christo 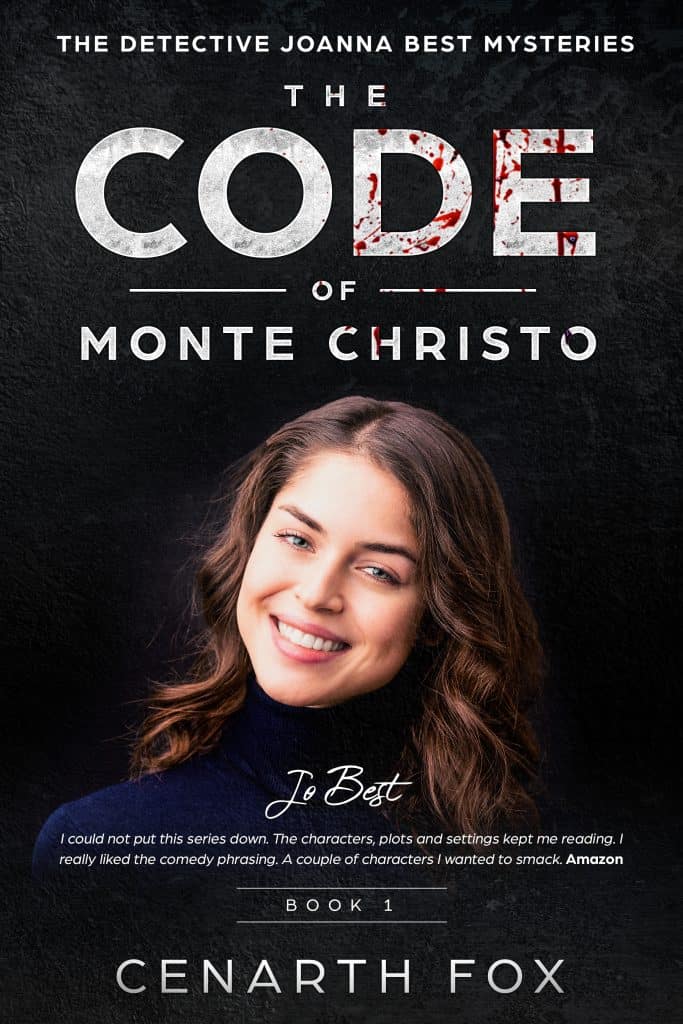 Detective Joanna Best
1
Murder Mystery
Joanna Best is a brilliant homicide cop and a damn good criminal. She clashes with senior police and dangerous villains. But Jo isn’t a criminal by choice. The only way to fix a family crisis is to break the law, and as she consorts with crims, she tries to solve a double homicide where her colleagues may have arrested the wrong guy. Juggling two jobs is deadly as her partner in crime and her Homicide boss both plan to knife her. So when a maniac tortures her family, Jo panics. Can she find a double homicide murderer? Is her career over? Will a loved family member be killed? And what on Earth is the Code of Monte Christo?

Detective Senior Constable Joanna Best is the main character of an Agatha Christie style murder mystery, whodunit. She begins her probation as a Detective at the beginning of the book and we follow her both professionally and personally for the space of a week or two.

There is a raft of other characters, all supporting Jo and her story. With multiple crimes being committed and all being interconnected in some way, these supporting characters inclusion wasn’t wasted. Although, if you struggle to remember lots of characters you may struggle with that aspect as there are quite a few.

We follow Jo becoming a Homicide Detective and her first two cases, one in Elsternwick and one in the Dandenong’s. While investigating these we discover the family secret and begin the secret side project.

I can’t really say much else about the storyline because it’s so interwoven and since it’s a bit of a mystery, anything I say could give away parts of the story and take away your enjoyment of it.

Very quickly I got the feeling that this was going to be a bit of an Agatha Christie style murder mystery, and in a way I was right. Even Jo thought that!

The complexity, the way everything is interwoven, the little details that bring it together are all so well done that I definitely want to read more of the series. Yet the language was something that held me back just a little.

Not enough to dislike the book, but just enough that I couldn’t give it a higher rating.

It felt like some of the explanations you see in a script were included while the descriptions you’d typically find in a book were missing. Given he also writes plays this makes sense so it wasn’t a huge deal to me, especially since this is set in my home city. I know all the locations extremely well and so could imagine them with ease. But if you’re not familiar with the settings I think this might be more noticeable to you.

At no point did I find I couldn’t engage with and enjoy the book; it was just something I noticed and wanted to mention in case it impacted your ability to enjoy the book. Which I do think you should go and read if you enjoy the Agatha Christie style murder mysteries!

Cenarth is an Australian with a Welsh name pronounced Kenarth. As a writer he has created plays, musicals, radio scripts, and fiction and non-fiction books.

The Invisible Radio Show, The Story of Jazz, The Elements of Music and The History of Rock ‘n Roll broadcast on ABC radio.

A trilogy of plays, a novel and a series of five children’s books about Sherlock Holmes. Plays about famous people including Shakespeare, Dickens, the Brontes, Arthur Conan Doyle and Agatha Christie.

Fifteen novels including the World War 2 thrillers A Plum Job and A Plum Jam, Cassocked Savage, a fictional account of the life of the father of the Bronte sisters, Tricky Conscience, a medical thriller and Noodles for Shakespeare, a tale of Vietnamese refugees in a retelling of Pygmalion Down Under, and eight books in the series, The Detective Joanna Best Mysteries.

His non-fiction titles include The Stage Musical, How to Write and Sell Your Plays, Staging Successful Shows, Play It Again Ham, Drama Skits ‘n Tips, 48 Mini Plays, 25 Mini Musicals and Poetry in Motion.

This review contains affiliate links you can use to purchase the book. If you buy the book using that link I, or the author, will receive a small commission from the sale. This comes at no additional cost to you.
.com
.co.uk
.com.au
Book Depository
PrevPreviousOur Little Secret – Rachael Stewart
NextA Touch of Death – Rebecca CrundenNext

Rachael has brought us a book set in the Italian countryside. Given her penchant for steamy writing, what has she got in store for us this time?

Rachael Stewart is proving to be a popular author for me through Rach Random Resources. I wonder if her latest book will keep me interested like her previous books?