Holding Out For a Hero 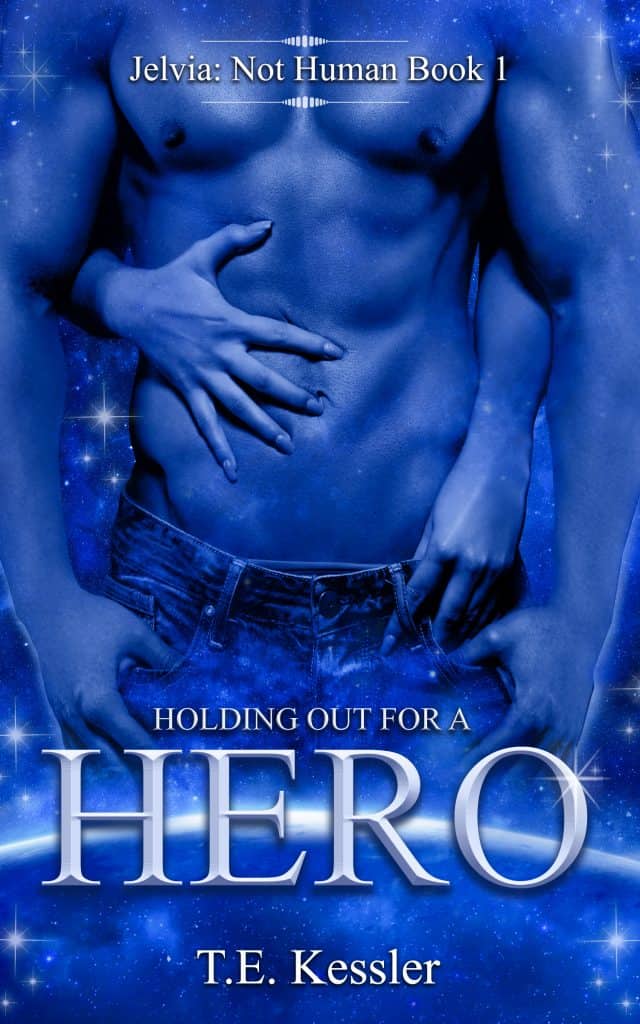 Jelvia: Not Human
1
Sci-Fi Romance
Primal. Savage. Untamed. An alternate Earth where humans live alongside another species. When she was twelve years old, her mother was murdered—and ever since Macy Shaw had been subconsciously searching for a hero to protect the defenceless. But the hero she found was a Jelvia—a species deadly to humans. When her friend was rescued by a Jelvia, Macy used her connections as a journalist to go after the biggest story of her life. Narcifer saved a woman by merely being Jelvian—his presence striking terror in the hearts of the men who were attacking her. So when a red-headed reporter not only began asking questions about his ‘heroism’ but brazenly offered her business card, his interest was piqued. Narcifer was tracking a scientist who had been imprisoning and conducting experiments on Jelvias—but no matter where Narcifer’s line of investigation took him, he was always brought back to the red-headed journalist, Macy Shaw. Was she involved? If so, she was guaranteed to die. His orders were to track Macy.But he went one step further. The overall backstory of the Jelvia: Not Human series, which will be told in time through the books: Imagine a world where humans aren’t the supreme being. But it’s still the 21st century. We still go out to work, enjoy vacations and watch Netflix on the TV. But in this world, living alongside us is a species called Jelvia. They are stronger, bigger, venomous—in short, superhuman. But they cannot be called ‘human’, nor do they want to do. They regard themselves as superior to us. Jelvians are predators—and humans are their prey, but as our population declines, they realise we need to be rationed. To accomplish this, they kill our criminals instead. They are judge, jury and executioner—but never believe they are vigilantes, killing the bad. They are more than that. Much more. Jelvias have been grooming us to live our lives in ignorance of their existence. No one knows for certain how the Jelvias came to be. No one can remember a time when the Jelvia didn’t exist, but no one knows anything about their evolution. People who question the timeline of the Jelvia, die. People who ask questions about the Jelvia, die.

Welcome back everyone, I’m desperately trying to keep up with my commitments. Especially those I made with Rachel.

I love sci-fi, alien romances and romances in general. So I jumped on the opportunity to read this series, one I hadn’t heard of before. In some ways this book is amazing, and then in others I hated it and felt the writer was immature, out of touch and generally needed help writing romances.

The politics, the intrigue, the action. It all kept me engaged, interested and wanting to read more.

What fell apart for me was the romance and sex scenes. They felt weird, out of touch and unrealistic. What really made this obvious for me was when Nacifer’s kinkiness came out. I’ve nothing against that kind of sexual antics, but it felt weird to bring it out within a couple of days of properly meeting and starting to date someone.

You’ve barely begun to explore each other’s bodies. How can you be bored enough to need to move onto other exploits so soon?

I also realised at that point that the book spans less than a week. I get instant attraction, lust etc. But love to the point of willing to die for the other, break oaths, turn your back on your own species? It just felt weird to me.

I also found the language used in all of the sex scenes was clinical, rushed and generally made me think the author was a guy trying to get into the female psyche. You know when guys try to talk dirty and as a woman, you’re like “that just feels gross, no, just stop talking, that’s not sexy”. That’s how I felt reading those sex scenes.

Thank you for reading and I hope you enjoyed this review; on Friday I’ll be reviewing Battle Magic by Tamora Pierce. Continue to read further down to find out about the author.

Tina Kessler writes steamy romance for the 18+ market and is the pen name of Louise Wise.

Louise Wise is a British author from the Midlands in England. Her debut novel is the acclaimed sci-fi romance titled EDEN, which was followed by its sequel HUNTED in 2013.

Forthcoming, JELVIA: NOT HUMAN series is themed on the above Eden and Hunted books.

Wise took the decision to write under the name of T. E Kessler for her JELVIA: NOT HUMAN series to separate them from her regular novels to the mature material. Her other works include:

Wise enjoys writing comedy and finds a place for it in ALL her books. She has written numerous short stories for women’s magazines such as Take a Break and Woman’s Own.

This review contains affiliate links you can use to purchase the book. If you buy the book using that link I, or the author, will receive a small commission from the sale. This comes at no additional cost to you.
.com
.co.uk
.com.au
Book Depository
PrevPreviousThe Gin Lover’s Guide to Dating – Nina Kaye
NextBattle Magic – Tamora PierceNext

A Christmas Wedding at the Castle – Eliza J. Scott

We’re back for a surprise with Livvie and Zander. How their relationship survived the first year I don’t know!

Murder mysteries aren’t a genre I tend to love, but when you have such strong Agatha Christie feels, how can I not give it a go?

2 Replies to “Holding Out for a Hero – T.E. Kessler and Louise Wise”