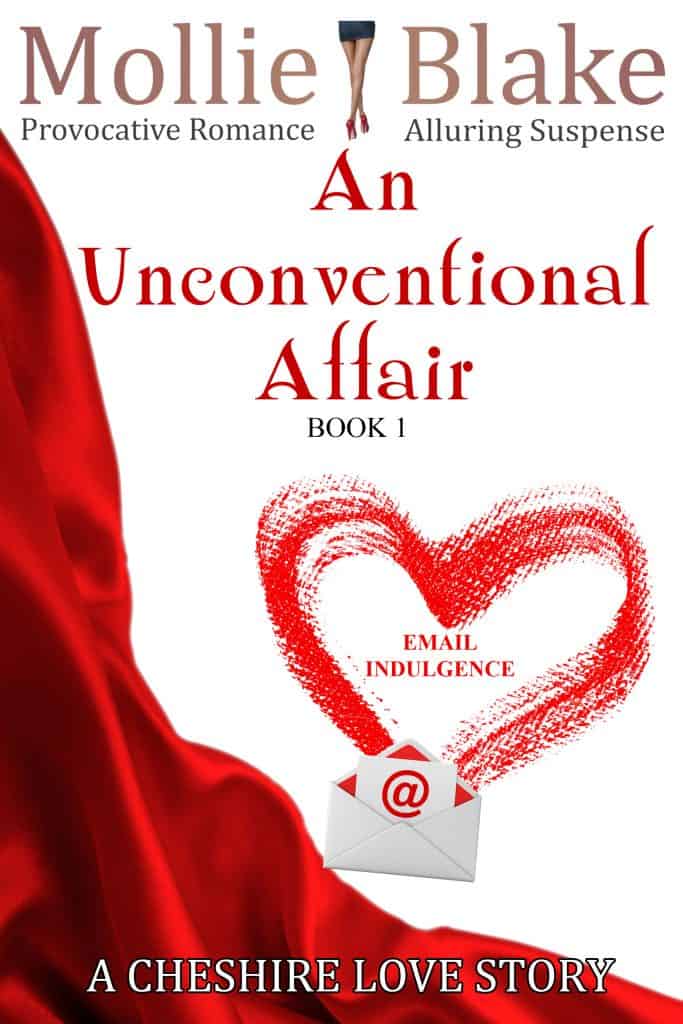 A Cheshire Love Story
1
Romance
Tranquility “Tee” Hammond is head of a law firm. Having escaped a violent husband, with a son she was really too young to have had, her life revolved around her work. There was little time for anything else and she didn’t need anything else. When she was inclined to treat herself to a little sexual pleasure, she engaged the services of Email Indulgence–an exclusive club–one email for one night of sex with a man she didn’t know and didn’t need to care about again. For her, it was enough. But her life was about to be changed by a friend of Tee’s son at university, Barrington Stone, fifteen years her junior who is determined to woo her into an unconventional affair.

Welcome back all, this review is one of many book tour review’s I’m participating in over the next couple of months So be prepared for lot’s of blurbs, author bios etc and potentially weird posting dates to fall in line with the availability on the tours. However, where possible I will stick to my regular posting day, Monday’s.

I hope you will enjoy this review as it’s only a very newly published book! I always envied those that got to read books and provide a review before they were released. And now I’m discovering that I can be one of those people. As such, I’d just like to say a massive thankyou to Rachael and the authors that utilise her reach to allow us to read and review these books before they are released to the public.

Also, I’m normally quite late to the party and end up reading a book in a series way after it’s finished or most of the way through and end up raving about something that other’s have known about for quite some time.

So to know that I’ve read the first book in this series before it’s released is pretty amazing and a first for me. And this first book set me up to expect a pretty good second book!

And on to my review, but don’t forget to read all the way down to see details of a prize giveaway!

I read this book in a little over a day as I spent my time lazing in the sun. And to read about how an older woman overcomes domestic violence to become a single mum who raises a boy who graduates high school and then university. Except right as  he’s about to graduate uni one of his friends falls for his mum. And that’s where the “Unconventional Affair” comes from.

Except it’s not as dirty as it seems it is. In reality it’s just a young guy who falls for an older woman and the fight they have to prove themselves as a legitimate couple. Even to each other. And then next thing we know Barrington moves to Melbourne, Australia (where I just have to say, no one except the most bogon of bogons ACTUALLY uses the word “Sheila”, when will international authors finally get that we are the same as them?! We’re not some weirdo species with another name for our women!) and starts a new life.

Anyway I didn’t find this book as “unconventional” as the title suggested. However I DID find the unexpected crime quite interesting! Given the blurb I wasn’t expecting anything more than a standard romance but this one really had me on tenterhooks by the end of it!

I look forward to the next one being released so that I can read that one and see what happens to Barrington and Tee!

If you’ve enjoyed this review don’t forget to check out the others that are participating in this blog tour and you can see the details below:

Mollie Blake is a published author of contemporary romance. A lover of reading sexy stories, Mollie decided to go one step further and write her own. Her romances are filled with danger and peppered with hot sexy scenes. She is a member of International Thriller Writers and UK Romantic Novelists Association.

This review contains affiliate links you can use to purchase the book. If you buy the book using that link I, or the author, will receive a small commission from the sale. This comes at no additional cost to you.
.com
.co.uk
.com.au
Book Depository
PrevPreviousDream Warrior – Sherrilyn Kenyon
NextBad Moon Rising – Sherrilyn KenyonNext

All Wrapped Up In You – Sun Chara

A YA fantasy with a lot of action and what appears to be a little bit of romance!

The Makings of a Lady – Catherine Tinley