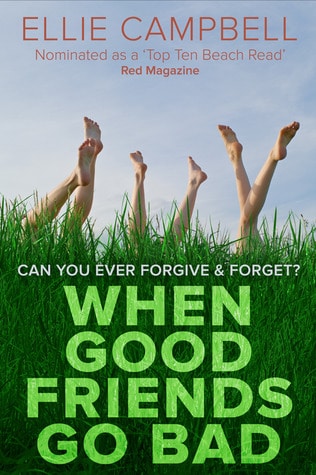 Chick Lit
All through school tomboy Jen, snobby Georgina, hippy Meg and gentle Rowan were inseparable. But when a childish prank turned bad their friendship was torn apart. Twelve years later Rowan organised a reunion dinner and all did not go well. Rowan never appeared; Georgina’s shocking secret was revealed; Meg behaved outrageously; and Jen finally decided it was time to move on. And that’s just what she did for the following ten years … Until now, when in the midst of her divorce Jen receives a desperate call from Meg. On a personal mission to track down Rowan, Meg manages to convince Georgina and Jen to put aside their differences and help her. But none of them even begin to imagine the extent to which their loyalties will be tested as their past finally catches up with them.

Welcome back all, this week’s book’s theme is a little bit different because it’s looking at friendship relationships rather than sexual relationships. I hope you enjoy this one like I did, it was a great change of pace for me.

Jumping into this book I got a little confused because we jump between 3 different times; during high school, 10 years after high school and then nearly 20 years after high school. But I think this had more to do with me not paying attention to the chapter names than it being written poorly. I kinda barely glanced at them because I was so intent on just reading what happened next. Throughout this time however we’re focused mainly on Jen’s point of view out of all 4 girls.

So when we’re jumping between the year’s we learn little bit’s and pieces of what happened during their years in  high school together, which I gota say sound pretty bad! My school was nothing like this, but at the same time I do see news reports of some of those things happening in some schools in Australia so it wasn’t completely foreign to me.

But then they all lose track of each other after “something” happened at the end of one year and they all got pulled in separate directions by their parents. They don’t expand on what this is until much later in the book, and in all honesty I don’t think it was bad enough to separate them that completely and wholly. However, one of them, Rowan, wants to reconnect with them after about 10 years and so calls them and organises to meet up and reconnect. Unfortunately that experience doesn’t work out so well.

Rowan never turns up, Georgina is pregnant by Jen’s high school sweet heart, Meg is typically a little bit crazy and drags off some woman’s man in an attempt to land some acting gigs. Jen on the other hand realises she’s pregnant by her boyfriend who’s 8 years younger than her and starts freaking out. As she’s panicking about this potentially being true her high school sweetheart knocks on her door in the middle of the night wanting to “talk”. Needless to say Jen ignores him, leaves early in the morning to get a pregnancy test and go back to her boyfriend to break the news to him. Throughout these chapters I was a bit shocked at how the girls were treating each other buy also trying to figure out why Rowan never showed. Was she in a car accident driving there? Was she really as forgetful as they all say? But my gut was telling me it was something more sinister.

Fast forward to “now”, which is almost 20 years after high school and Jen’s marriage to Ollie (the younger boyfriend) is falling apart, Georgina is a success but not at all happy in her marriage to Jen’s high school sweetheart, Meg is broke and Rowan is missing.

Cue the main storyline for the book! The quest to find and save Rowan. The girls work together in a number of ways while trying to hide certain aspects of their life out of shame of appearing to be a failure. After quite a few up’s and downs, confusion on my part on why they were treating each other that way and conflicting gut feelings we finally find Rowan.

And it was NOT what I was expecting! To be honest, after all their research and lack of finding any trace of Rowan I was expecting to find her buried in a grave somewhere. So to find her alive and in hiding was a big shock for me. I mean, why would someone willingly put themselves back into the pre-technology time in the middle (ok technically she was outside of the township) of some rural Wale’s town?

And then we find out about how she was abused sexually before entering into a relationship that resulted in domestic violence. Even though he didn’t beat her silly, he still controlled every aspect of her life. Which is a part of domestic violence that a lot of people forget about, which is a shame because that is often much harder to walk away from than physical violence. But I’m really glad that her friends stuck by her and they faced her attacker together and managed to fend him off. I’m hoping it’s for good but in reality I doubt it. In reality I feel like he’d just try to be sneakier about it.

But the part of this book that I really enjoyed in the end was Ollie and Jen realising that they both still loved each other. And that they both just needed to find their love of life again for the relationship to feel better, more alive and overall feel the love again. I really loved this ended after spending the whole book on a rollercoaster of emotions changing directions constantly.

Thankyou for reading this weeks review and I look forward to seeing you again when I review “The Makings of a Lady” by Catherine Tinley next week!

This review contains affiliate links you can use to purchase the book. If you buy the book using that link I, or the author, will receive a small commission from the sale. This comes at no additional cost to you.
.com
.co.uk
.com.au
Book Depository
PrevPreviousThe Guardian – Sherrilyn Kenyon
NextTime Untime – Sherrilyn KenyonNext

A YA fantasy with a lot of action and what appears to be a little bit of romance!

One of the best things about reading books set in Australia by Australian authors is the way they describe the land and the smells.

We’re kick starting a new series by Zoe that’s all about ORCS! You’ll be surprised so I really hope you want to find out more.