The Magic in the Weaving 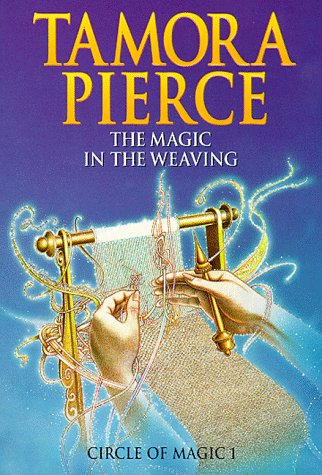 The Circle of Magic
1
Young Adult, Fantasy
With her gift of weaving silk thread and creating light, Sandry is brought to the Winding Circle community. There she meets Briar, a former thief who has a way with plants; Daja, an outcast gifted at metalcraft; and Tris, whose connection with the weather unsettles everyone, including herself. At Winding Circle, the four misfits are taught how to use their magic – and to trust one another. But then disaster strikes their new home. Can Sandry weave together four kinds of magical power and save herself, her friends, and the one place where they’ve ever been accepted?

The way Tamora has written the first two series in the Circle Universe means that each book has a main hero; who the book is typically named after. So with this book being named after Sandry, it means that she will be the main hero.

Since this book is written for the Young Adult audience it’s not as complex or as deep as most of the books I read these days. But I’ve grown up reading Tamora Pierce and I just love how she writes her stories.

In this case I could feel the despair, anger and confusion that Sandry, Daja, Tris and Briar feel as they are found by Niklaren Goldeye. Then as they try to find their places in their new world.

Since I wasn’t much older (I think a yr or two?) than they were when I first read these books, I could really relate to the emotional turmoil they were going through.

For me, my school friendship group was changing. And since I’m not very good socially (and neither are these 4) this was a bit stressful for me. But with the help of constantly reading Tamora’s books in those few years (see evidence below if you don’t believe me about how many times I read these books) I managed to get through it.

And I even discovered some other people who liked reading, and who even liked Tamora Pierce as well! That was a bit of a turning point for me when I realised I had something else in common with others. Which actually seems hard to believe since I’d already spent the last 6-7 years with most of them by that point in time.

So I have a few different fav parts, I mean, these characters and their stories are written in such a great way that you can’t help but have a few parts of the book you just can’t wait to read again!

Ok, so my all time fav is when Sandry pulls rank on some snobby noble girl (Sandry’s family is like upper upper upper echelon of society and only the people actually ruling a few different countries rank higher than her) to get Daja a seat when Daja first arrives and doesn’t know where to sit in the dining hall.

A girl nearby muttered, “If that’s a lady, I’m a cat.”
Reaching out, Sandry lifted the pitcher of milk from the table. Cradling it in both hands, she walked over to the mutterer.
“I am Sandrilene fa Toren, daughter of Count Mattin fer Toren and his countess, Amiliane fa Landreg. I am the great-niece of his grace, Duke Vedris of this realm of Emelan, and cousin of her Imperial Highness, Empress Berenene of the Namorn Empire. You are Esmelle ei Pragin, daughter of Baron Witten en Pragin and his lady Colledia of House Wheelwright, a merchant house. If I tell you my friend is a lady, then you”- carefully she poured milk into Esmelle’s plate-“you had best start lapping, kitty.”
She set the pitcher down and returned to her chair.

When Sandry and Daja first meet

Being someone who HATES bullies and will actively fight back I practically bounce in my seat with glee every time I read that bit. It’s just so hilarious and it just sets the tone for Sandry’s personality in a way no other quote can quite grasp.

I do love a number of other moments throughout the book. Those moments of banter, discovery and amazement are heady feelings. The way Sandry, Daja, Tris and Briar grow, make discoveries and learn about magic together never fail to strike a chord with me and give me a good chuckle and/or smile

Thank you for reading and next week I’ll have the next book (Tris’s Book) up next week!

This review contains affiliate links you can use to purchase the book. If you buy the book using that link I, or the author, will receive a small commission from the sale. This comes at no additional cost to you.
.com
.co.uk
.com.au
Book Depository
PrevPreviousDay of the Dead – Don Simkovich and Lon Casley Bixby
NextNo Place Like Home – Maxine MorreyNext

What is it about bad boys that attract women? Especially a younger, bad boy?

After the Party – A.K. Ritchie

This book contains: Peyton is a family violence survivor who escaped her situation to Toronto. She’s a great writer who reviews and discusses local punk

An amazingly sweet Christmas romance with a heroine that is unapologetically herself.

4 Replies to “The Magic in the Weaving – Tamora Pierce”