Welcome back and a Happy New Year everyone, this is the first book I am reviewing from a new source, and in the new year and I can definitely say I chose an interesting book to start off with!

This book is about “Satan”, his life story and how he’s really not the bad guy he’s made out to be. Given that I’m not really religious and since I read another book last yr by Charlie Ludlow who challenged our religious thinking, I was interested to see what this one would deliver.

This story is written in the style of Satan dictating his life to Wag, his author, so it really does feel like Satan is talking directly to you. With the occasional debate between Wag and Satan at the end of some chapters. We start off right back before “humans” had evolved, before the first cave paintings became a thing and before language was really starting to develop. We are right back to when Neanderthals are just starting to create tools from shaping rocks by banging them against each other.

We then proceed through various points in time throughout history and even have some pretty well known historical figures referenced (eg. Atilla the Hun) at various points in time. Throughout each of these encounters Satan was telling us about how he was trying to enlighten the human race and that if we looked closely we would see he was telling the truth. He discusses the various times in history when things were swinging his way and certain powerful people became afraid and so cracked down on the people with fear of damnation. As much as some of the stuff Satan talks about seems farfetched, there were quite a few parts that I really agreed with. I’m not really religious so I didn’t have the feeling that I was betraying my faith, or having to try and unlearn something that was completely ingrained in who I was. So for some people I can see this as being a difficult read. But if you take it as a fun way to see history and human nature in a different way then you will enjoy this.

The ending felt like rather than Satan telling us his history, he was trying to entertain Wag to the point were some comments from Wag even made it into the main text. At this point in time we crossed over from a different view of history to really questioning the universe. A new concept of how the world was created, aliens etc were all brought into it. And to be honest. Some of it felt like it could even be possible.

Does that mean I’ve reached the enlightenment that Satan is wanting us to achieve? Does that mean I’m open to new concepts? Or does it just mean I’m gullible to a good story? I don’t know. But I had fun contemplating these concepts and what it’d mean for us human’s if there was any truth to any of it.

Thank you for reading and I hope you enjoyed this review, on Monday I will be reviewing A Greek Affair by Linn B. Halton. 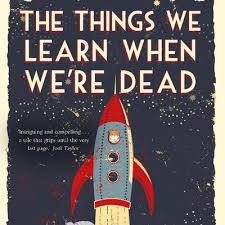 Welcome back everyone! I was incentivized to grab a copy of this book thanks to Bookmark That who posted on Twitter saying how good this book was and that at the time it was free to download on Kindle. Me being cheap decided “hey why not? sounds interesting and it’s free!” So I grabbed a copy and looked forward to reading it.

So this one was a little confusing to follow as it jumped between various stages of Lorna’s life. We begin at the end of her life on the night that she dies, and then jump to what feels like her teenage years before jumping to the “present”. I got the sense that the whole point of this was for Lorna to choose life, to choose to be the person she always wanted to be but lost in the journey that is becoming an adult. That journey from “I want to save the world” to “I need to just pay the bills”.

I really liked that we learnt about Lorna’s past by her reliving her memories and then being with her while she reevaluated those memories with the perspective of hindsight. We could see what she was feeling at the time, but then also how those experiences impacted her further down the line in her life. This is something I believe many of us struggle with, myself included. And I believe learning the ability to view events that have happened with perspective and hindsight are important for us to be able to move forwards and progress. This can be as simple as realising we spoke in anger and apologising to a loved one, all the way through to putting your foot in your mouth during an important work meeting and needing to go back and fix this with multiple people before it has a negative impact on your career.

During this reflection time we are struggling with the belief that Lorna is dead an in Heaven. With God and his 2IC personally helping Lorna through this transition she’s able to work out what really happened to cause her death. Reading about some of the things Lorna experienced and at such a young age, you gotta feel for her. She had her brother die at a young age and an alcoholic father as a result to deal with while growing up.

On a regular day each of those are traumatic enough, let alone the other emotionally challenging circumstances that occurred throughout her young life. Learning about each of these and how she responded really gave me clarity into who she was and therefore how each of these events impacted her as a person.