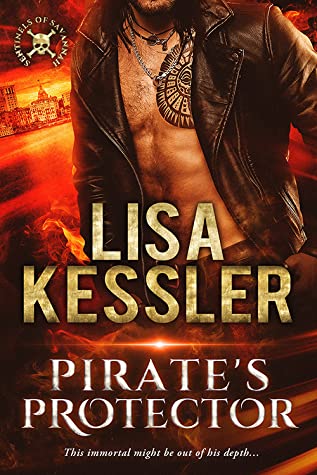 Sentinels of Savannah
7
Paranormal Romance
This immortal might be out of his depth… After two centuries as an immortal pirate, Duke Proctor figures he’s experienced pretty much everything. Which is exactly when he finds himself held at gunpoint…by a mermaid. But the exquisitely lush blonde—whose eyes are deeper than the sea—is here for a reason. Someone has stolen from her and she’s certain Duke is behind it. Annika Mare knows for a fact that the Sea Dog’s crew has her comb. In the wrong hands, it places Annika under the control of whoever wields it. But the comb has been taken—and working with this unbelievably sexy human pirate to recover it poses an entirely different kind of threat. Now these two immortals must find the thief, and fast. But there are other forces at work, bigger than Duke or Annika could possibly know. And a powerful artifact in the hands of evil isn’t nearly as dangerous as the sizzlingly-hot attraction that could engulf them both…

Duke is the loyal and protective First Mate of the Sea Dog crew. He’s steadfastly avoided romantic entanglements for the past 200 years, even with many of his crew mates falling in love, because he doesn’t want to watch them grow old and die.

Annika is a mermaid that’s been around on Earth for a couple thousand years, and yet has maintained minimal contact with humans until now. After some incidents that happened with her family, she’s pretty much alone on Earth and was quite happy like this until she met Duke and he somehow managed to sneak past her defences.

Annika seeks out the Sea Dog after following it in from the Atlantic at the end of the previous book (Pirate’s Paradox) thanks to the Atlanteans giving her comb to them. When she can’t find it, she’s forced to confront someone on the crew in the hopes of finding it, which turns out to be Duke’s position.

After Annika shoots Duke in an attempt to get her comb back, he offers to help her in exchange for answering questions about mermaids. After accepting his offer of help, Annika and Duke work together to find an unlikely enemy, unexpected returns and the missing comb.

Another highly enjoyable and exciting read where Lisa adds twists to old folklore and myths to create her own universe. My only fault with the details is about the chemical make up of Neptune.

If it’s a gaseous planet, made up of the same gas components as water but in a gas form. How do the mermaid swim? And how do they breathe underwater?

And another one that just bugged me coz I’m odd. How do they sleep underwater?

All probably irrelevant and don’t impact the story but my woozey brain as I read this while quite sick struggled to comprehend and make the connections, or just move on from these details.

In terms of the story itself, it was full of twists and turns with a major development that I didn’t see coming. Well, I did, but then Lisa added a comment that made me change tack and it turns out I was right initially. So, I got a small shock when that was revealed!

After learning more about Captain Flynn in this, I’m now quite excited for his book to come out so I can find out what happens on his romance/relationship front!

This review contains affiliate links you can use to purchase the book. If you buy the book using that link I, or the author, will receive a small commission from the sale. This comes at no additional cost to you.
.com
.co.uk
.com.au
Book Depository
PrevPreviousPirate’s Paradox – Lisa Kessler
NextThe Shop Girls Forbidden Love – Jenni FletcherNext

A roller-coaster mid-way through the series. That’s either a good thing or a bad thing.

A Time of Prophecy – Rebecca Crunden

The end of the Pentalogy has arrived and while a lot happens, at the same time not really.