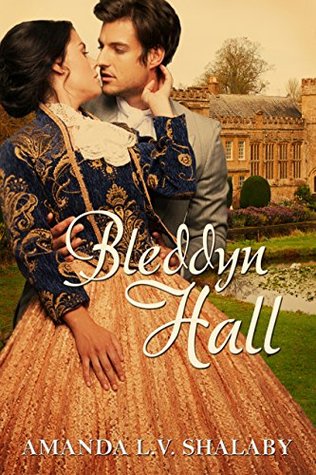 Regency Romance, Murder Mystery
After a whirlwind romance during the London Season, Lady Isabel Sutton finds herself quickly engaged to the handsome Lord Tresham Bleddyn, Earl of Dancy. When his father passes away suddenly, however, his period of mourning delays their marriage and ruins the season for Tresham’s younger, twin sisters, Annalise and Rosamund. After the girls invite Isabel to their Yorkshire home, Bleddyn Hall, Tresham seems an entirely different man than the one she fell in love with…

Bleddyn Hall is the first book in quite some time that I’ve read a historical romance novel. And pretty much all of these books have followed the same these. Girl is reluctant to get married because it puts her in a man’s control and her family have always allowed her freedoms most woman in that age (most of these books I read are regency romance ones) were allowed. However they meet/ reconnect with someone that loves them for themselves and they go through their courtship only to meet an obstacle (usually some silly rumour or misunderstanding) to then work things out and get married and live happily ever after.

Bleddyn Hall definitely doesn’t follow this theme! Yes, it has a girl who doesn’t want to marry for money or social standing. BUT Isabel is a very typical regency age woman. She strictly believes in polite society, social norms and is against anything that might be looked upon as “improper”. The only thing that makes her different to most regency age woman is that she wants to marry for love and is willing to marry down or to a poor man to ensure that she is loved.

Yet somehow the most handsome and eligible bachelor of the season falls almost immediately in love with her. How dos this happen? I can count the number of times I met the hottest, nicest guy of the night and had him fall instantly in love with me. Precisely 0 times. It just doesn’t happen! And what really frustrates me about most romance novels is when this happens without any real life drama.

The good thing Amanda has done here is that while writing from Isabel’s perspective and the occasional change to Tresham’s perspective is that neither want to fall instantly in love. Their internal dialogue (done from a third person perspective which I found weird and tricky to wrap my head around for the first quarter of the book) shows us that they admit there is an immediate attraction and lust between them. But neither of them want to jump into anything. Instead they get to know each other by talking, flirting and teasing one another. Which is something many people don’t do in this day and age, and it’s something that my partner and I get criticised for.

Over a series of weeks (because everything marriage wise seems to only need a month or so to decide upon in that age) Tresham proposes to Isabel and she accepts. As their families are celebrating the news, Tresham receives word that his father has suddenly passed away. As such he heads home the next day while his mother and twin younger sisters work on convincing Isabel to join them when they leave in a few days.

Boy was I in for a surprise! Turns out that there was a murder mystery underway at Bleddyn Hall and Tresham was the main target for. As Isabel was being ignored by her previously loving fiance I was left wondering why she would put up with it and why she wouldn’t just go back to her aunt and uncle in London. Surely if Tresham really loved Isabel he wouldn’t be so mean to her, even if he is distraught after the death of his father?!

I was proved wrong after Isabel and Tresham’s younger brother Clement started investigating what was happening themselves in secret after they discovered that a long forgotten brother Ewan was the cause of both murders. And surprisingly in the end it turns out Ewan is actually Tresham’s twin brother and had locked him away and was masquerading as him. Which explains why Tresham had been acting so odd compared to everything we knew about him up until his fathers death.

After a bit of planning, Isabel and Clement manage to get the key to Tresham’s cell and work to break him out. But not after two sinister encounters with Ewan where they needed to pretend like they didn’t know it was actually Ewan, and not Tresham. The first encounter with Ewan was Isabel taking breakfast in a sun room where Ewan unexpectedly joined her. Unfortunately, although Ewan starts of well imitating a gentleman he inevitably reverts to his nefarious ways and attempts to rape Isabel. Luckily Isabel is able to fight him off long enough for Clement and a couple of servants to come rushing in and ensure her safety in that moment.

After that encounter, Clement stays with Isabel and they rush to Clement’s father’s study to get the key to Tresham’s cell and then on to free him. Except as is normal at this point of the book, Ewan has a spy following them and quickly learns that they are in there and so anticipates something is happening. Luckily Clement knows of a secret tunnel from the study down to near the stables and helps Isabel fit through the passage.

This is where I found myself starting to really get into the book. I admit, up until this point I was only mildly interested in the story, however as soon as Isabel started to really solve mysteries my interest was piqued and I found myself drawn in. I started resenting needing to follow through with my plans and drive myself to the airport because I just wanted to know if they managed to save Tresham!

Good news is that they are successful. What I found quite amusing and found myself feeling smug about, as that while Isabel and Clement were freeing Tresham and Ewan was chasing after them. One of Ewan’s creditors finally catches up to him and kills him! Therefore making Isabel’s and Clement’s rescue of Tresham so much easier.

Then I was given a bit of a heart attach when Tresham calls Isabel to his study to discuss their engagement. The way he was talking I thought for sure he was going to end the engagement and mean that Isabel stayed, figured out what was happening and suffered his crazy brother for nothing! Luckily Tresham is just so proper he was trying to be understanding of what Isabel has gone through and give her the option to leave if she wanted.
Luckily she didn’t want that and they got married a few months later to then chaperone the twin sisters the following season to be reunited with their chosen men.

Now there are a number of other twists, cool facts and family secrets I haven’t mentioned. So if you like romantic murder mysteries there is still plenty of things for you to work out as you read the book.

As always, I’d love to hear your thoughts on this review so please comment below!

And the next book out of the rank is “The Seven Steps to Closure” by Donna Joy Usher.

This review contains affiliate links you can use to purchase the book. If you buy the book using that link I, or the author, will receive a small commission from the sale. This comes at no additional cost to you.
.com
.co.uk
.com.au
Book Depository
PrevPreviousThirty-Eight Days – Len Webster
NextThe Seven Steps to Closure – Donna Joy UsherNext

A great follow up in some ways while leaving others lacking just a little bit. How will Iggy and Will’s story play out?

An additional book all about Briar, Rosethorn and Evvy and their travels after finding Evvy.