Barnabas Tew and the Case of the Nine Worlds 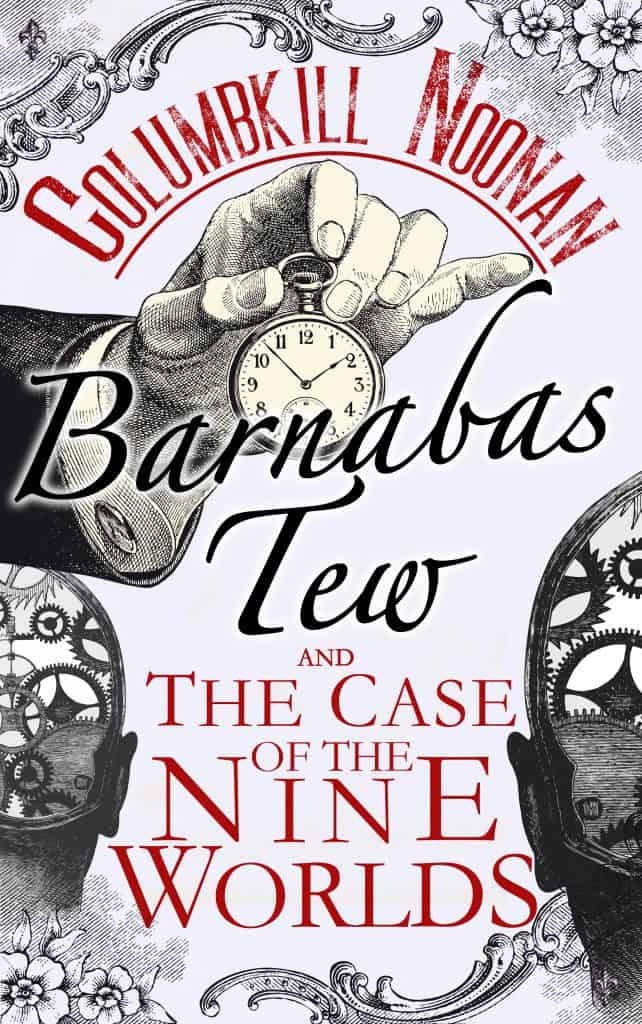 Barnabas Tew
2
Young Adult, Historical
Hold your flying horses! Barnabas Tew and Wilfred Colby are back, and, once again, they’re in a bit of a pickle. Barnabas and Wilfred, two earnest but bumbling Victorian detectives, travel through the Nine Worlds of Norse mythology, trying to stave off the impending end of the world – an event which the locals call Ragnarok. This time, however, the intrepid twosome has some help: a brave Viking seer named Brynhild and her flying horse. Can the two plucky detectives and the fearsome Brynhild outwit those who would bring about Ragnarok? Will they survive the harsh conditions and terrifying creatures of the Norse afterlife? Will they save the world…again?

Welcome back all, I hope you’ve continued to enjoy my posts. I’d like to take a moment to say a special thankyou to all my readers! Knowing that you’re out there reading my thoughts on the books I read is pretty special, especially since you’re taking time out of your (probably, because who isn’t these days?) busy lives.

Jumping into Barnabas Tew and the Case of the Nine Worlds. This is the second book in a series about two detectives that get taken into the various lands of the gods. I know the first book is set in Egypt because the title is “Barnabas Tew and the Case of the Missing Scarab”. However they also tell us throughout this book that Anubis kidnapped them and had them working in the Egyptian afterlife to solve his case. We join the two detectives when they are leaving Egypt and on their way to Asgard. One of the Viking god realms, and this particular one houses Valhalla.

Another thing that irked me was that it felt like facts would get conflicting info throughout the book. For example, very early on in the book I could have sworn they said Barnabas was a mouse, and Bindi was also a mouse when they met. Yet later in the book they are saying that both had only mouse heads while the rest of their bodies were still human. I could have just mis-read it or not remembered it correctly.

Also, I’m not claiming to be a viking expert. But from my knowledge of viking mythology there is some conflicting info in this book. I understand that there are going to be aspects that are not historically accurate, because otherwise how can you write an interesting novel? But little things like Loki being married, only half of the dead warriors going to Valhalla, dwarves and elves etc are all thing’s I’d never heard of before when I’ve read about the vikings. As I said, I’m no expert but when I compare those kinds of conflicts with other authors that have written about ancient times and gods. I’ve felt like they have put a lot more thought behind their writing, and you can tell that they’ve researched it. And I didn’t get that feeling with this one. This one felt like they’ve watched one episode of Vikings and thought “hey that’s cool, I could write a book on those gods!”

Now for people who enjoy reading to just escape from reality for a bit, who doesn’t mind the writing style and isn’t too hung up on facts. I honestly think you’d enjoy this. There’s a good amount of action, intrigue, mystery and a touch of romance to keep you interested. I just personally felt it wasn’t quite the style of writing that really grabbed my attention and kept it.

I’m also conscious of the fact that I started this book after reading like 8 books in two weeks. Where two of those books had me hooked the whole way. Kind of like if you were to watch a marathon of Game of Thrones and then try and watch something like Big Bang Theory afterwards. They are so different in so many ways. And because of how complex and intense Game of Thrones is, it’s hard to tear your mind away from that to go into something a bit more fun and carefree.

I wouldn’t mind reading the other books because the banter between Barnabas and Wilfred was very amusing. It’s just they probably wont be at the top of my pile and it might take me a while to get to the point where I want to read them. But as I said, I think that’s got to do more with me and what I like rather than the book itself.

I think this series could make a great present to a teenager or young adult who enjoys reading. The writing style throws me back to memories of reading the Twilight, Tamora Pierce and Richelle Mead series. All of which are massive hits with the younger readers.

I hope you’ve enjoyed this review. I strive to be honest but at the same time don’t like people who publicly diss something that’s not their style. When I come across books like that for me I try to explain why I felt like that and who it might be better suited for. That way I’m hoping you can make informed choices about anything you might want to read or recommend based on my opinions. If you are interested in this book you can find the links below, and keep in mind that this is the second book in the series.

Anyway, that’s me done for another week! Next week is the final instalment of Behind the Door “The Brilliant Game” by Adriana Gavazzoni. Are you as excited to find out who the killer is as I am? Well you will have to tune in next week to see if we can find out!

This review contains affiliate links you can use to purchase the book. If you buy the book using that link I, or the author, will receive a small commission from the sale. This comes at no additional cost to you.
.com
.co.uk
.com.au
Book Depository
PrevPreviousNo Mercy – Sherrilyn Kenyon
NextRetribution – Sherrilyn KenyonNext

The Earl She Should Never Desire – Lara Temple

Traumatic histories and love triangles make for an interesting romance!

The First Comes Love series continues, in a backwater town of Indiana where a major movie is being filmed. As the locals and movie makers come together, how will love prevail?