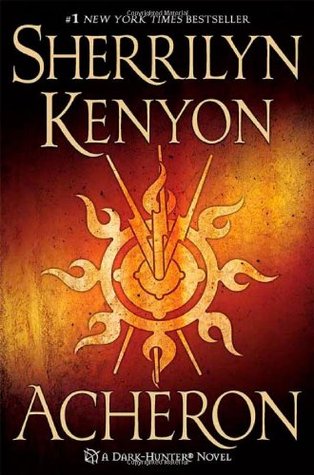 Dark Hunter
14
Fantasy Romance
Eleven thousand years ago a god was born. Cursed into the body of a human, Acheron endured a lifetime of hatred. His human death unleashed an unspeakable horror that almost destroyed the earth. Brought back against his will, he became the sole defender of mankind. Only it was never that simple… For centuries, he has fought for our survival and hidden a past he never wants revealed. Now his survival, and ours, hinges on the very woman who threatens him. Old enemies reawaken and unite to kill them both. War has never been deadlier… or more fun.

Welcome back to another week and another book in the Dark Hunter series. I’m gona start this one off by letting you know that this one spends almost as much time focused on the past as it does the present. So Acheron’s life and love stories are played out in full for us.

Firstly, let’s recap a few thing’s we’ve learnt about Acheron up to this point:

So we go into this book thinking we know what we need to know about Acheron only to learn that we know NOTHING about the poor guy. The first thing we learn about him is that he was born the oldest son of an ancient Greek king. But in actual fact he is the son of god’s but placed in the womb of a queen to ensure that he  is raised as well as he possibly can. Except because of his eye colour he is not recognised by his “father” and his mother drinks herself to death as a result.

Due to the colour of his eye’s his “father” gives him to his “uncle” who takes him to Atlantis and sells him as a whore to make money off of him. After a significant amount of time his sister tries to save him but fails and he get’s sent back. Then when his uncle dies he pisses off his father who throws him out to the streets. As a result he ends up back in his home city as a whore and eventually his father finds out and as a result gets locked into a dungeon. His father only cares what happens down there when Styx his twin almost dies because Acheron is trying to kill himself via starvation.

In the end he’s able to find a way to live some kind of “life” by bribing his guards with sex to let him out. And that’s how he runs into Artemis. At the same time as his sister is being sold to Apollo Acheron ties himself to Artemis. After a lot of pain and anger and on the night Acheron comes into his godly powers Artemis drugs him to the point where he can’t save his sister and her son. As a result he is killed in the morning and Acheron’s mum’s favourite demon dies while trying to save him.

Reading the tragedy of all of this really makes me feel for him. After everything humanity and the gods did to him how can he still be sane? How can he possibly WANT to save humanity from Daimons? O and did I mention Daimons came into creation because of his sister? She was the mistress that was killed at the age of 27 that Apollo loved above all others. If only Artemis hadn’t been so selfish and hadn’t drugged him maybe Daimons wouldn’t have been created in the first place.

Fast forward a millennia and we come across Soteria who believes she’s found the location of Atlantis. The one place that holds secrets that could expose Acheron’s past that he doesn’t want anyone to know. So even though Acheron doesn’t like how close Soteria is he needs to save her life from those trying to kill her. And in the mean time discovers that lemonade make’s him drunk. I found this part hilarious! I mean how did he go THAT LONG without trying lemonade to discover that it made him drunk?! And to make it even funnier, while drunk he gets into an argument with his demon because he wants to take Soteria back to Atlantis for real but Simi manages to convince him to only make a 3D image of it that Acheron can take Soteria on a tour through.

I mean, since when did the demon with impulse control issues become the more reasonable one? And Soteria’s comment about “thank god I returned to normal size when you passed out” was pretty good too.

All the banter between Soteria and Acheron is great because it shows that no matter how all powerful, kind etc you are there will always be someone who doesn’t like you and will do things just to spite/ piss you off. And for Acheron, that’s Soteria. During this journey we also discover that Acheron plays with a young boy on Saturday morning’s on PS3 every week, referees kids basketball and also builds houses for the homeless.

Like how do those traits marry up with our fearless warrior (who only seems brought down by lemonade), and then also the abused boy who couldn’t do anything without offending his family. This book was one full of contradictions and inaccuracies between people. And every time I read this I’m reminded that we only know the parts of people that they are willing to share.

And I know I for one am very closed off about sharing who I am. So how could I possibly expect others to be any more open? I mean you would be lucky to get me to say hi to someone I don’t know in a social way without having had a few glasses of alcohol. And even then I’ll be slow to start off, I won’t initiate the conversation and will find it hard to respond to the person trying to talk to me.

Anyway, I think that’s enough rambling from me. I will let you go for this week and I will see you next week for the next instalment!

This review contains affiliate links you can use to purchase the book. If you buy the book using that link I, or the author, will receive a small commission from the sale. This comes at no additional cost to you.
.com
.co.uk
.com.au
Book Depository
PrevPreviousReinventing Mona – Jennifer Coburn
NextLara’s Journal – A. GavazzoniNext

I loved Jenni Fletcher the first time I read her, and this was a worth follow up for my first impressions.

While the claiming was obvious in the first book, that isn’t quite the same this time making for a very different romance.

Coming in partway through a series can be difficult, but Victoria makes it easy. Find out why!